A freelance writer, married and mother of three, Amira Hashim alleged senior journalist Wajahat Kazmi  with sexual harassment in her recent blog on Express Tribune. Alleged Journalist appointed work to write article for his website/s and handle his social media accounts for a month. According to the Amira, she accepted the work because he was a reputed journalist who have worked with SAMAA, CNN, Dawn, Huffington Post and BBC as well.

At the end end of the month when she asked for the payment, he said that she can have more work for her. He offered him 400$/month to do intimating chats with him which he later defined as “sex chats” in his messages. Freelance writer. Amira have uploaded the screenshots of the chat with the Wajahat Kazmi as well, When she refused to offer this filthy service. The journalist delayed/blocked her payment. 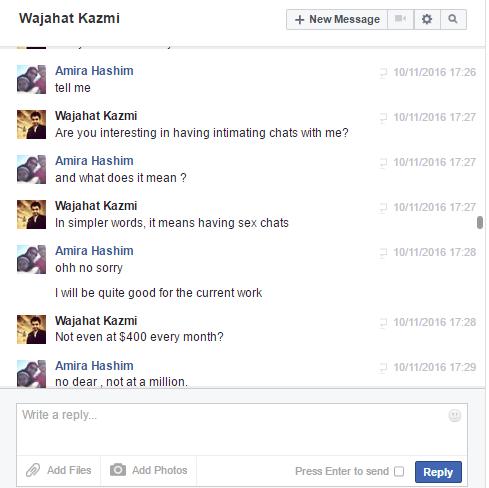 Wajahat Kazmi shared a detailed response with on that, you can read the complete on ET website, some of it is

I am not only raising a complaint to the Cyber Crime Circle of FIA against the writer of this blog for her hugely false claims but also against ET for publishing something which is really damaging to my reputation without knowing the real facts on the basis of only conversational screenshots of WhatsApp and Facebook Messenger which hardly takes five minutes to create on websites easily available with one simple Google search.

Readers of the Express Tribune demonstrated a lot of anger in the comment section. Hassan said,

Good to see that (yo)u have got the entire conversation with you, these can serve as a proof against him for not releasing (yo)ur due payments, apart from exposing him (yo)u should also try and file a case against him, assuming that (yo)u have a written contract with (yo)u, if nothing else then i guess you better present these conversion in the court hopefully it will work for u. good to see our women taking bold steps. but at least u got (yo)ur lesson quite well.

Read the full story on Express Tribune Blogs. Please share your opinion about this.